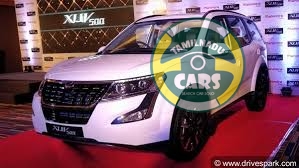 - It will be based on a new ladder-on-frame chassis.

The next-generation Mahindra Scorpio was spotted testing for the first-time near Chengalpattu in Tamil Nadu. Internally codenamed as Z101, the new Scorpio will be underpinned by an updated ladder-on-frame chassis, which will also underpin the next-gen Mahindra Thar.

The new Mahindra Scorpio is expected to be launched in India sometime in 2020, while it could make its debut at the Auto Expo 2020. As can be seen in the spy shots the 2020 Scorpio will feature new body panels, while the overall design silhouette is upright. That said, the prototype seems to have a lower roofline as compared to the current-generation model. The 2020 Mahindra Scorpio will feature an updated front fascia that will include a slotted grille, redesigned bumper and an upright nose. On the profile, the SUV has a sharp kink on the beltline towards the C-pillar, and it also has larger doors, which hint at a possibly longer wheelbase. The rear profile is redesigned as well and there’s the D-pillar is slightly raked compared to the current model. While the interiors are not visible in these spy images, it is safe to assume that the new Scorpio will feature a completely revised cabin with quality materials. We aren’t sure whether Mahindra-owned design house Pininfarina has worked on the design of the interiors or exteriors. However, what we can confirm is that the car is conceptualized at Mahindra North American Technical Centre in Detroit, USA and engineered at the Mahindra Research Valley in Chennai. Under the hood of the new Mahindra Scorpio will be an all-new 2.0-litre BS-VI compliant diesel motor that will reportedly make a maximum of 170bhp and a peak torque of 400Nm. It will be available with a choice of six-speed manual and automatic transmissions. The same engine will make its way into the next-gen Mahindra XUV500(which is co-developed with Ford) and the new Mahindra Thar.